Grow Ohio Valley (GrowOV) is a Wheeling-based urban agriculture initiative that has become a regional model for urban farming and food justice in Appalachia.

Photographs and text by Rebecca Kiger.

Located 60 miles southwest of Pittsburgh in the northern panhandle of West Virginia, Wheeling was once a thriving hub of the region’s steel industry. The decline of industry in the late twentieth century, however, led to population loss and significant property vacancy that lingers today.

Since 2014, GrowOV has repurposed more than 20 acres1Learn more. of the city’s vacant and underutilized land for food production while concurrently developing a food distribution network to reach the city’s most vulnerable populations.

The nonprofit’s work represents a community-led example of how urban environments that have been systematically abandoned and left fallow can provide “a new economic landscape, one offering increased prosperity, improved health, and a better environment,” as the GrowOV website summarizes. GrowOV was cofounded by West Virginia native Danny Swan. Since 2014, Danny, his family, and the GrowOV team have made it their mission to put Wheeling’s vacant landscapes to work. They have designed and implemented a thriving urban ecosystem of repurposed landscapes throughout the city. Wheeling’s unique urban environments have become home to GrowOV’s farms. Steep hillsides, vacant lots, a derailed housing project site, a former vineyard, and the land under a highway viaduct have been repurposed into productive plots. Each parcel showcases the tenets of GrowOV’s mission to build regional food security through accessibility, sustainability, education, and entrepreneurship. In tandem with the development of its farm network on Wheeling’s vacant landscapes, GrowOV has developed a systematic and equitable approach to growing, harvesting, and distributing its food throughout the region. The organization has built a robust food distribution network that includes a mobile farmer’s market and the brick-and-mortar Public Market in downtown Wheeling. In order to reach the city’s least food-secure population, the distribution system is purposefully designed and strategically tied to Wheeling’s urban environment. GrowOV consistently parks its mobile farmer’s market outside Wheeling public schools to coincide with after school pickups. The Public Market is conveniently located in downtown Wheeling, adjacent to the city’s public transit terminal. GrowOV grew out of Danny Swan’s early urban agriculture experiences working with children at Laughlin Chapel, an after-school center in Wheeling, while he was in college.4Jason Kane and Ariel Min, “Photo Essay: What’s growing in West Virginia’s urban ruins?” PBS NewsHour, October 28, 2014. Danny volunteered with the Laughlin Chapel kids to plant Farm 18, GrowOV’s first farm, in 2014. Over the past six years, community interest has grown substantially, and Danny and his team have expanded their territory and partnerships to include more than 20 acres of vacant land. Today Danny and his own two children tend to the Lincoln Meadow Farm, one of four farm locations in GrowOV’s ecosystem. 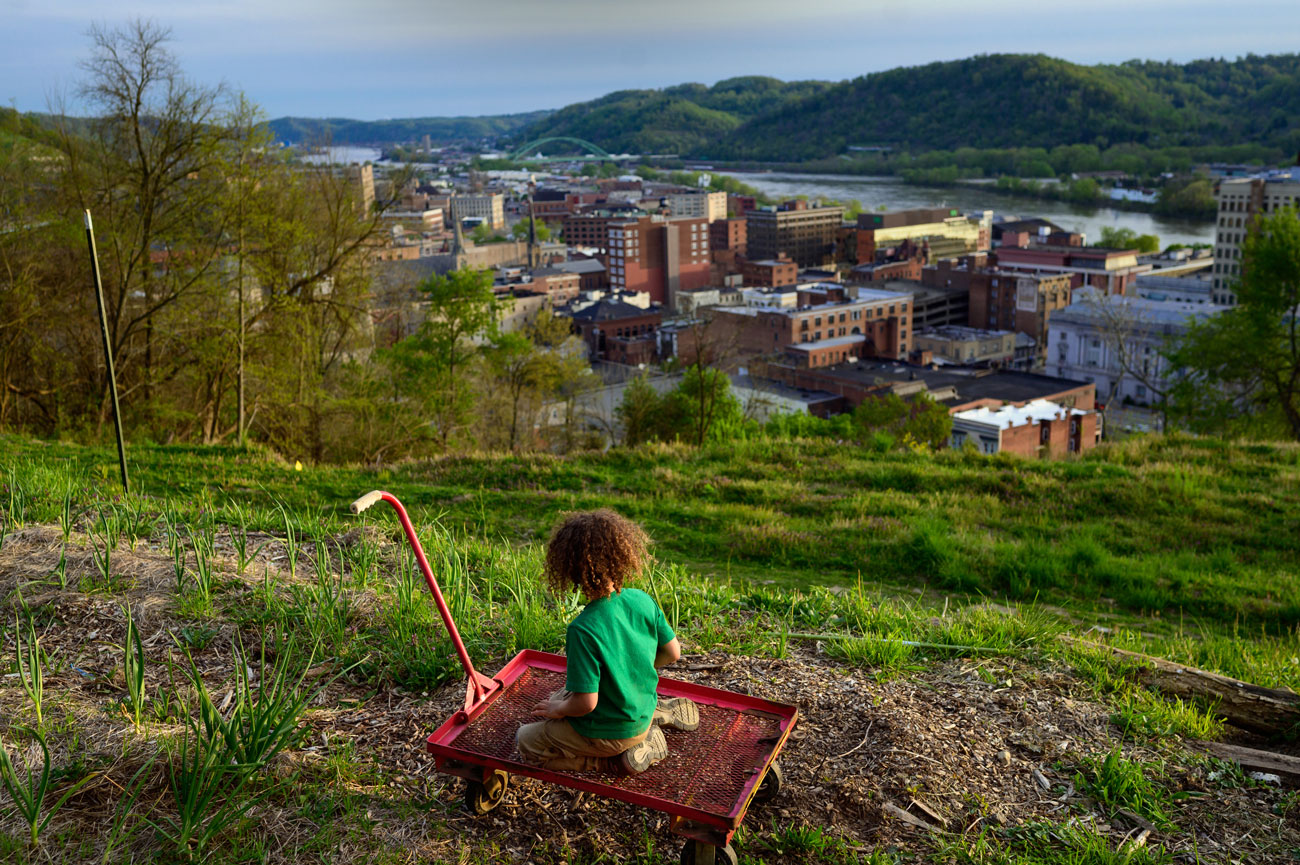 GrowOV has had a profound community and environmental impact on Wheeling. What started as a volunteer project with 20 tomato plants has grown into a regional network of community-led food production, equitable food distribution, community service programs, and education initiatives that support Wheeling’s current residents and provide a source of land-based inspiration for its next generation.

is a nationally acclaimed photographer and a resident of Wheeling, West Virginia. Kiger’s work documents the people and places of her native state and has been published in The New York Times, NPR, and Time Magazine.