Steven Holl, founder of the international Steven Holl Architects, lectures on the recent work of the firm. 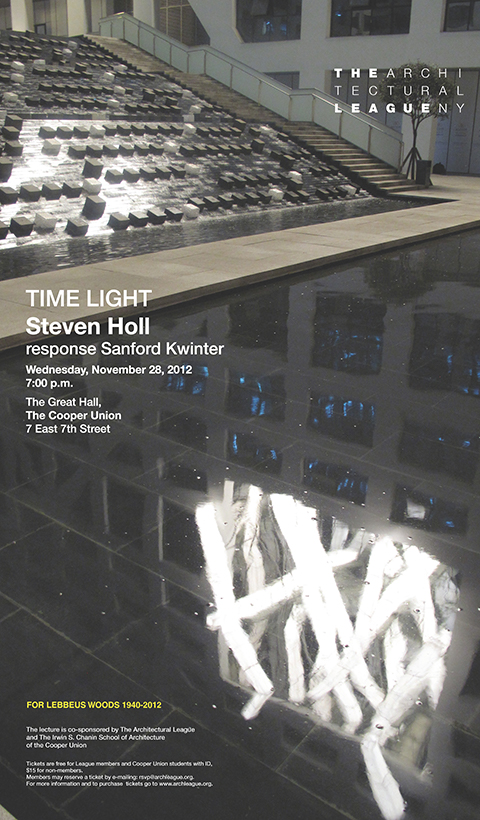 Steven Holl Architects is an architecture and urban design office working globally as one office from two locations: New York City and Beijing. With each project, the firm explores new ways of integrating an organizing idea with the programmatic and functional essence of a building, “always using the unique character of a program and a site as the starting point for an architectural idea.”

Holl’s architecture and writing has undergone a shift in emphasis from his earlier concern with typology to his current interest in phenomenology. Along with Juhani Pallasmaa and Alberto Perez-Gomez, Holl wrote essays for the Japanese architectural journal A+U under the title “Questions of Perception: Phenomenology of Architecture.” The publication was reissued as a book in 2006.

His most recent projects include the Daeyang Gallery and House in Seoul and the Columbia University Campbell Sports Center in New York City. Currently in construction are the new Glasgow School of Art, the Nanjing Sifang Museum of Art, and the Beirut Marina.

Steven Holl was the recipient of the 2012 AIA Gold Medal. His firm has been honored with many awards, publications, and exhibitions for excellence in design. Most recently, its Cité de l’Océan et du Surf Museum (pictured in the slideshow below) won the Emirates Glass Leaf Award, the Annual Design Review, and the American Architecture Award. In 2001, Holl was named America’s best architect by Time.

Moderated by Sanford Kwinter. Kwinter is a writer, theorist, and professor of architectural theory and criticism at the Harvard Graduate School of Design and co-director of the Master’s in Design Studies Program.

This lecture is co-sponsored by The Irwin S. Chanin School of Architecture of The Cooper Union.