By the time he turned 20, Casper Mork-Ulnes had lived in Italy, Norway, and Scotland, as well as both the east and west coasts of the US. His design work draws upon each of these experiences, but reflects a particularly strong influence from Norway, where his family is from and where he maintains an office. (The firm is based in Oslo and San Francisco.)

The League’s Sarah Wesseler spoke with Mork-Ulnes about the role of Norwegian design traditions and cultural sensibilities in his practice—and how climate change is affecting his work with wood.

A number of your projects in the US have taken advantage of design strategies used in traditional Norwegian architecture, which relies heavily on wood. Can you talk about your work with wood, and how you think about translating lessons from Norwegian vernacular buildings to other parts of the world?

Well, ever since I remember I’ve been logging in the forest, so I have a very intimate relationship to wood. I come from a farm in Norway, which my brother and I have just taken over from my father. My grandfather was a farmer. He grew crops on the arable land in the summertime, and in the wintertime, when there’s snow on the ground, he logged in the forest, so there would be minimal disruption from pulling out the logs and so forth. I started helping my grandfather log when I was a very young child. So wood is a material I’ve always been personally drawn to.

And wood architecture obviously has a lot of cultural significance in Scandinavia, and particularly in Norway, where there are stave churches that are over 1,000 years old. These buildings are still standing, and they’re still in great shape.

You also see wood agrarian structures throughout the country. They’re quite beautiful structures, but very utilitarian. We often talk about where the doors are positioned in relationship to the roof slope so that snow doesn’t fall on people who go into the building, or the way in which the storehouses were raised on stone pillars so that rodents couldn’t get in. That’s where the farmers stored their food during winters, so if rodents got in there and ate the food, their families would starve to death. So these structures are very functional and efficient, but also very unique architecturally. This cultural heritage is something we draw from on a lot of our projects in Norway, but also in the US. For a project in Lake Tahoe, up in the mountains, we raised the building out of the snow to stop the wood from rotting, like the stave churches were raised on stone foundations.

We also coated it in pine tar, like the stave churches have been coated for the last thousand years—which is why they’re still standing. How is climate change affecting your work with wood? A lot of your projects are in California, which has obviously been hit particularly hard by wildfires in the past few years. Is this changing how you use the material?

Our Ridge House project is an interesting example. That client likes wood; he always said “Wood is good” whenever we suggested using it. But we ended up doing a fully concrete building so that he wouldn’t need to do maintenance on the wood—even though you don’t have to do maintenance if you clad it in tar—and because of fire risk. We went to great lengths to develop the tectonic language of the wood formwork, and the way in which it’s expressed both inside and outside, to reference the wooden barns in the area. So that project was made entirely out of concrete, and when the most recent fires came through we were expecting that the glass would break, at least. But nothing happened, even though a massive firestorm went right up to the building. It was very surreal. You go to the site and everything else is burned, but the building looks like nothing happened.

But the technology of wood is also changing to make it able to withstand the types of challenges we’re seeing with climate change. Regardless of the danger of increased fires in California, wood has an incredible promise as a building material, even on larger projects. In fact, the largest project we currently have in our office is over 50 apartments with commercial and retail use, and it’s being designed using cross-laminated timber (CLT). That project is in Norway, though.

We did some research on cross-laminated timber for a house we’re doing now in the States, and we demonstrated that it has great qualities with regard to fire. But everybody thinks that wood just burns, so in the end, the client couldn’t get over that fear, even though the research showed that it shouldn’t be a problem. So we’re not using CLT for the project. Convincing people is really the issue.

Is cross-laminated timber common in Norway? Where would you say Norway is with regard to that technology compared to the United States?

It’s very common. The world’s tallest CLT building is in Norway; it was finished last year. The government actually requires CLT for a lot of its buildings.

But I also see it coming in the United States, although it has had its challenges with the building code. We’ve been working on a CLT house in Oregon. When we started the project, it was supposed to be the first house built with US-produced CLT, but the construction’s taken a long time, so I’m not sure if we can claim that title or not. But it is happening, and I hope things will start to move more rapidly—both in terms of the codes and adoption within the industry—so that we can use it on more of our projects in the US.

As more US designers start to use CLT in their projects, are there lessons they can learn from Norway?

From what I understand, the reason why it’s been so difficult to push CLT in the US has really been the slowness of adapting the building code to a new material. People always think social democratic countries have way too much government and bureaucracy, but I would argue that in this case maybe it’s the other way around, because we didn’t face this sort of restraint in adapting to this new technology in Norway.

But I think the challenges are also partially cultural. America is such a big country with so many different regions. I think people in, you know, Florida or other states just might think you can’t have a wood house there because they’ve always built out of cinder block or whatever—that kind of thing. It comes down to the acceptance of wood as a finished material, inside and out.

Another big difference is that Norway manages its forests more sustainably than the US. When I used to log in our forest, we would plant seedlings the next summer—that’s how it’s always been. It’s not like the clear-cutting you have seen in California, where trees are just cut down one time, and then the forest doesn’t grow back like it should.

What about access to contractors and consultants who have familiarity with wood? I’m assuming that in Norway a lot of builders understand how to work with wood. Is that the case? Is it easier to find people who know how to do this kind of work than it would be in the States?

To a certain degree. Because we’ve always used wood as a material, it’s very easy to find the workforce and the engineering and so forth. Although in some regions of the United States, like Washington State and Maine, people also have the ability to work with wood, even though they may not have a history going back thousands of years like Norway does.

But I do see that in the United States, getting a residential builder to frame a house that has metal studs, for example, and then getting a commercial builder to frame something out of wood studs . . . there’s sort of a stubbornness, a resistance to doing something they haven’t done before. Whereas in Norway, it’s not difficult to find people to work with wood. We use all kinds of wood, not just CLT.

For our Skigard Cabin, for instance, we used wood for every surface in the building, inside and out, including the insulation. The builders didn’t blink an eye, and in fact were the ones who pushed our vision. Even the bathrooms are clad all in wood, except for the toilet bowl and the sink bowl. Otherwise everything is in wood. 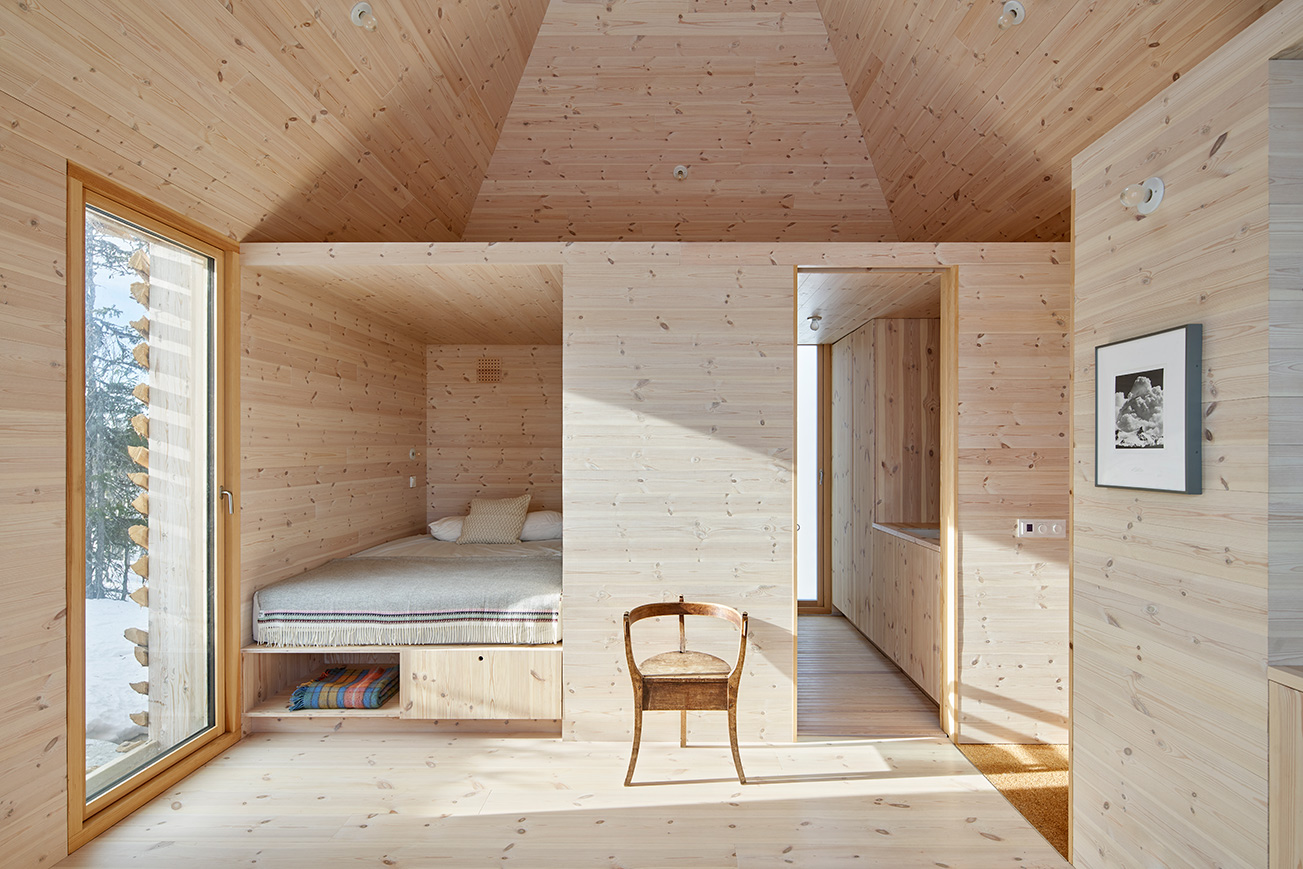 One of the comments about your work from the Emerging Voices jury is that the plans are very innovative and demonstrate a strong economy of means. You spoke a bit about Norwegian pragmatism. Can you talk about the idea of economy of means in your work and whether it relates back to these vernacular national traditions?

It’s definitely a Norwegian influence. It’s a very pragmatic, no-frills, no-nonsense culture. Part of it is simply the weather and the environment. It’s a vast country, by European standards, with a very small population and a very harsh environment and rugged terrain. Also, not many years ago, we were basically fishermen and women and farmers; we’re quite a simple culture in that sense. So I think that’s where the pragmatism has come from.

Obviously, we’ve been doused in oil money for the last few decades, for better or for worse. But the pragmatism is still very much there, no matter how many Teslas you see on the road in Oslo.

I think you can see this, for example, in Norway’s cabin culture. It’s common for Norwegians to have cabins where they go on the weekends—there are almost 500,000 cabins in Norway for a population of only about 5 million.  So we’ve designed cabins in Norway as well as weekend homes in the US, but the main difference is that in the US they’re 3,000 or 4,000 square feet, and in Norway they’re 1,000 square feet. But we still fit 12 people in our Norwegian cabins.

I think Norwegians are open to thinking more about efficiency and functionality, rather than just excess space, which there tends to be way too much of in the United States. That’s particularly true in suburban culture, as we all know. Little McMansions. 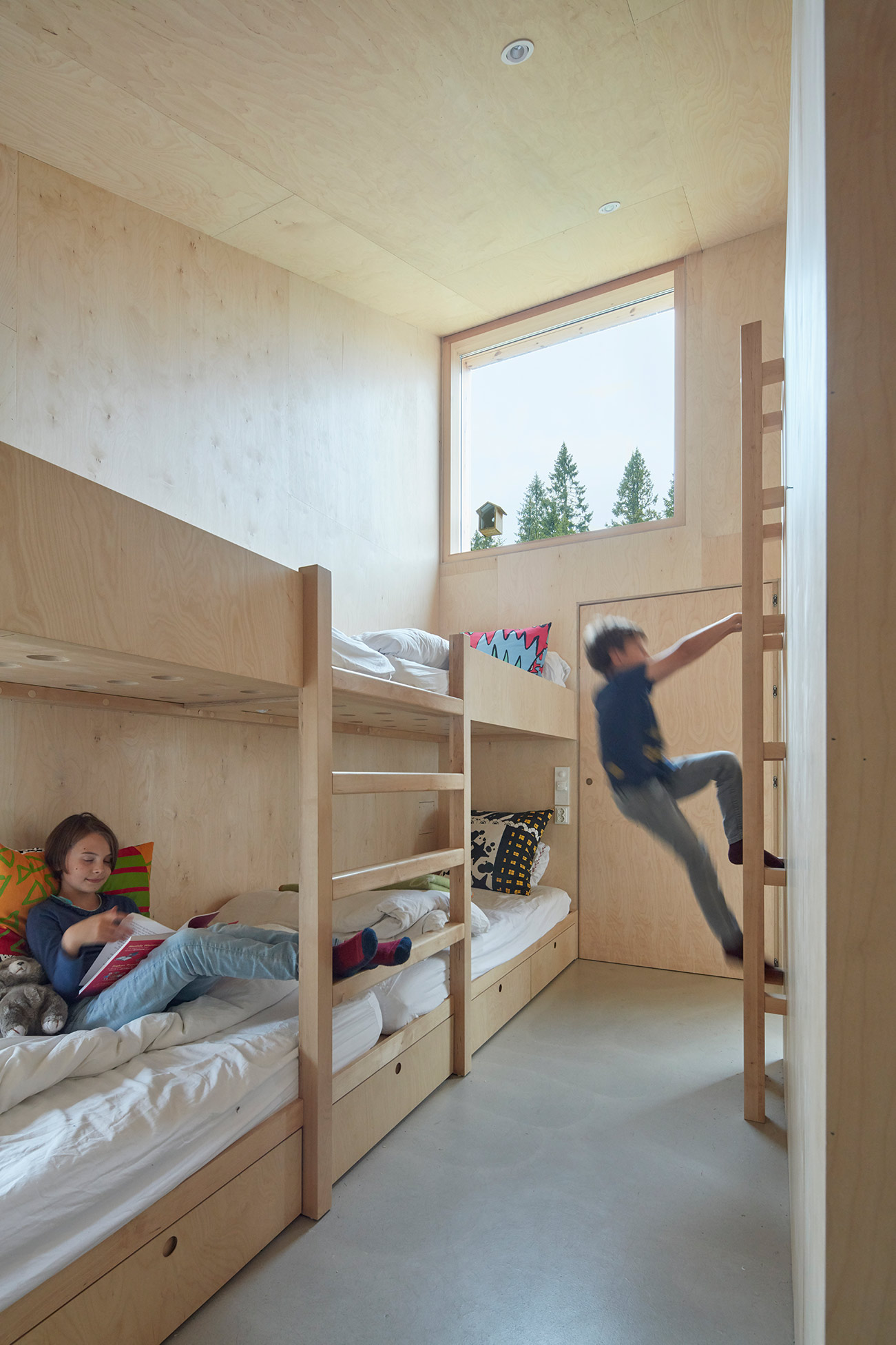 So there’s definitely an economy of means in our floor plans, but also in our details and our choice of materials. We’re always trying to pare things back, and I think that can be definitely attributed to my Norwegian upbringing. It’s also something I continue to learn when I look at these vernacular buildings and understand the very simple, pragmatic moves that led to these great wood buildings that are still standing 1,000 years later.